What is the Difference Between Biogas and Biomethane?

Biogas is the name given to the gas produced by a process called anaerobic digestion, where microorganisms convert biomass, plant, and animal material, to biogas in the absence of oxygen. 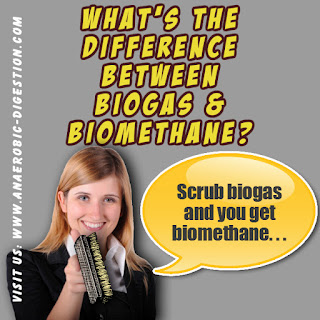 The biogas when it emerges from a digester is roughly 60% methane and 29% carbon dioxide, with trace elements of hydrogen sulphide. It is not high quality enough to be used as fuel gas for anything other than simply gas stoves, and specially corrosion protected machinery. The corrosive nature of hydrogen sulphide alone is enough to destroy the internals of all normal gas-burning equipment.

The biogas produced by landfills has usually been used to fuel reciprocating gas engines and generate electricity, but even when specially designed gas engines are used the impurities in raw biogas tend to result in high maintenance costs.

The solution is the use of biogas "upgrading", which is another word for using purification processes which produce very nearly pure methane, which is clean enough to inject into national natural gas grids, or use as a substitute for compressed natural gas as a "clean" transport fuel.

Biomethane is simply biogas which has been cleaned up, or "upgraded".

During upgrading the contaminants in the raw biogas stream are absorbed or scrubbed, leaving substantially more methane per unit volume of gas.

Traditionally there were four main methods of upgrading: water washing, pressure swing adsorption, selexol adsorbtion, and amine gas treating. Nowadays, there is an increasing use of gas separation membrane technology to perform this function.

There is a little more to it than that, but in a nutshell that is the difference between biogas and biomethane.

Before gas grid injection, or transport vehicle fuel use can occur the biomethane must be compressed. In addition the nature of the biomethane may need to be further adapted to the corresponding qualities of natural gas.

Biogas is considered to be a renewable resource because its production-and-use cycle is continuous, and in theory, it generates no net carbon dioxide.

In reality, inefficiencies of the biogas process and energy expended during upgrading means that some carbon net emissions do occur.

Nevertheless, its use produces far lower carbon emissions than almost any other process and biomethane is a renewable fuel with more uses than we could possibly list here, and an inexhaustible market.

Biomethane can even be used as a raw material to produce all the plastics which are currently manufactured from petroleum products.

We hope we answered your question about the difference between biogas and biomethane.

Much more about this subject can be found on our website Anaerobic-Digestion.com.


Fascinating Biomethane Facts from Around the Web:

Biomethane is a naturally occurring gas that is produced by the so-called anaerobic digestion of organic matter such as dead animal and plant material, manure, sewage, organic waste, etc. Chemically, it is identical to natural gas which is stored deep in the ground and is also produced from dead animal and plant material. However, there are several important differences between biomethane and fossil fuel derived methane despite the fact that both are produced from organic matter.

Natural gas is classified as fossil fuel, whereas biomethane is defined as a green source of energy. Like its name suggests, fossil fuel derived methane is produced from thousands or millions of years old fossil remains of organic matter that lies buried deep in the ground. Production of fossil-fuel derived methane, however, depends exclusively on its natural reserves which vary greatly from one country to another and are not available in limitless amounts. Biomethane, on the other hand, is produced from “fresh” organic matter which makes it a renewable source of energy that can be produced worldwide. via biomethane.org.uk

Biogas is produced from various biomass sources through a biochemical process, such as anaerobic digestion, or through thermochemical means, such as gasification. With minor cleanup, biogas can be used to generate electricity and heat. To fuel vehicles, biogas must be processed to a higher purity standard. This process is called conditioning or upgrading and involves the removal of water, carbon dioxide, hydrogen sulfide, and other trace elements. The resulting RNG, or biomethane, has a higher content of methane than raw biogas, which makes it comparable to conventional natural gas and thus a suitable energy source in applications that require pipeline-quality gas. via westport.com

Biogas typically refers to a mixture of different gases produced by the breakdown of organic matter in the absence of oxygen. Biogas can be produced from raw materials such as agricultural waste, manure, municipal waste, plant material, sewage, green waste or food waste. Biogas is a renewable energy source and in many cases exerts a very small carbon footprint.

Biogas can be compressed, the same way natural gas is compressed to CNG, and used to power motor vehicles. In the UK, for example, biogas is estimated to have the potential to replace around 17% of vehicle fuel.[3] It qualifies for renewable energy subsidies in some parts of the world. Biogas can be cleaned and upgraded to natural gas standards when it becomes bio-methane. Biogas is considered to be a renewable resource because its production-and-use cycle is continuous, and it generates no net carbon dioxide. Organic material grows, is converted and used and then regrows in a continually repeating cycle. From a carbon perspective, as much carbon dioxide is absorbed from the atmosphere in the growth of the primary bio-resource as is released when the material is ultimately converted to energy. via engie.com

Biomethane Can be Made from a Pile of Garbage

Amazingly, natural gas can be produced from a variety of sources, including a pile of garbage. The process from trash to gas makes natural gas a renewable fuel. Biogas is the term used for the methane that is developed from the breakdown of organic material in the absence of oxygen from sources such as sewage, municipal solid waste, and farm waste. Biomethane is the fuel that is produced by refining and removing any impurities from the biogas. And unlike fossil fuels, which are considered a finite resource, the natural gas produced from these sources is a renewable resource.

Compressed biogas (CBG) and CNG can be used interchangeably as a fuel in CNG vehicles. While pipeline gas is CNG-ready, biogas requires conditioning (cleaning) before compression. The conditioning process removes moisture (H2O), increases methane (CH4) content by removing carbon dioxide (CO2), and cleans the gas by removing hydrogen sulfide (H2S), siloxanes, and other trace elements. Although CBG is currently cheaper to produce than CNG—because the methane source is free—higher capital costs associated with CBG—due to conditioning—have the potential to offset this difference. One potential advantage of direct use of biomethane as opposed to those who inject gas back into the pipeline is that natural gas vehicles can tolerate somewhat higher levels of CO2, which can have a significant impact on gas cleanup costs. For injection into the pipeline, the biogas must be purified to about 98 to 99 percent methane. For direct use as a vehicle fuel, biogas may be cleaned to around 90 percent methane. via r-e-a.ne

We are expecting over 300 delegates, with exhibition stands from all of the major suppliers of Biomethane related plants. If you are considering Biomethane to Grid this is the one industry event you cannot afford to miss. via catalystforum.org.uk

Unlike other sources of renewable energy—such as solar and wind—biomethane doesn’t need the sun to shine or the wind to blow. Waste material can be converted into deliverable, renewable energy 24/7!

SoCalGas has compiled a list of suppliers that includes project developers, consultants, equipment manufacturers, installers, and others that may prove helpful to you in this process. Non-utility service providers may offer services that are the same or similar to the SoCalGas Biogas Conditioning/Upgrading Services Tariff and customers are encouraged to explore these service options. via cumminswestport.com

Awesome blog and its well written to understand it.
difference between biogas and natural gas

nice blog and its quite useful thanks for sharing your information.
difference between biogas and natural gas

Wow it is easy pity

It's free! Just type your email address into the panel below, and you will receive an email each time we post to this blog.

Or, for our RSS Updates